Horsepower supporting Horsepower was the slogan of the day in the amazing AMA Motors-sponsored event held at  Twin Palms Riding Centre in Saar.

The usual calm of a Friday morning was replaced by the rumble of engines as the massive MAN truck took up its position as the winner’s presentation platform. The event organisers had not expected the deluge of horses and riders that seemingly appeared out of nowhere with over 170 entrants for the various classes, an absolutely massive turnout, clearly emphasising the enthusiasm and support for locally-run events.   The morning started with a Treasure Hunt. In the juniors, Aimee Keen rode the entire day with her broken foot in a cast; this determined young lady gave it her best shot in every class, a real winner of the day. For the adults it was Ali White who found the treasure, but, in order not to disappoint any of the aspiring riders, AMA Motors provided all the entrants with medals, a lovely gesture. These medals were spotted being worn with pride long into the day.

There were a further three classes, and each split into junior and adult categories. Next up was a One Round with Jump Off class. Taking on 30 other juniors it was the talented Ahmed Essa who claimed a double, taking first and second places astride Tutu and Shumar respectively. In the adult section Yahya Ahmed performed an outstanding round astride Magroob to claim top podium position, followed by Mohammed Akbar on Najeeb.

In the Two Phase class, the juniors pulled out all the stops. Winning in fabulous style was Kate Addison astride The Chief and taking runner-up position was the determined Aimee with Rio. Ahmed Al Alawi clinched victory in the adult section, another double win as he rode Wanted into first place, and Tyson 2 into fourth. Close on his hooves was Ali Abdul Rasool with his red hot mount Chilli to take the runner-up spot.

The final class of the day was an Accumulator with Joker, fences standing at 90/100cm with a Joker at 110cm. With everything to go for, the riders were warmed up and ready to roll. Taking calculated risks is the requirement in this class, which is exactly what Manon Cote with Sirocco did to perfection taking home the top place for the juniors, Kate Addison with West Wind followed her on the podium. Making it look easy for the adults was Stephane Dreyer, his horse Angel just grew wings and flew into first place, Onyx giving Kat Rushton a gem of a round for the runner-up position.

A fantastic day was had by all. In addition to the jumping classes there were refreshments all day, cakes had been baked, there was a second hand tack stall and book stall. Guess the sweets in the jar and a raffle with an iPad donated by AMA Motors as the top prize. 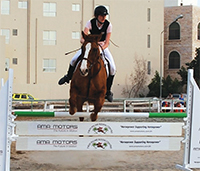