Bahrain-based AMA Motors has rolled out its new truck model at the ongoing Gulf Industry Fair.   The company is displaying MAN trucks under a 15-year partnership with Man Truck and Bus of Germany that has positioned it as the market leader in truck sales in Bahrain, said a senior official. “We have done roaring business over the past few years. We sold 127 trucks last year to many key corporations like Alba and DHL,” stated Simon Keen, general manager of AMA Motors. AMA, which is attending the Gulf Industry Fair for the third consecutive year, said it has always found business opportunities at the expo, which has encouraged it to return year after year. AMA Motors, which represents more than 10 leading European brands in the construction industry, is the Truck and Construction Equipment Division within the Ahmed Mansoor Al Aali (AMA Group). New at its stand this year is the mobile service support unit, which serves as a mobile workshop. Demonstrating the utility of the new model, Keen says the unit will be used by AMA Motors predominantly for its construction equipment site where the mobile workshop will be taken to the machine that breaks down or requires service – rather than doing it the other way round. The new model has been well received and two potential customers are already speaking of buying these units, said a beaming Keen, who hopes to secure a deal by the close of the fair. Also on display at its stand is MAN’s long-haul truck, which has already been supplied to companies such as DHL. Speaking about the event, Keen said the Gulf Industry Fair has always yielded results for AMA. "We have done deals worth over BD1 million ($2.64 million) over the years at the fair alone and hope to repeat its success this year as well," he added. AMA Motors, he said, has grown more than 300 per cent in the past two years registering a yearly turnover of BD8.7 million ($23 million). The company intends to open a new showroom soon to cater to the rising demand and increase in customers, added Keen. Since its beginnings in 1954, the AMA Group has evolved into one of the Bahrain’s premier business groups active in contracting, manufacturing, real estate and trading. Employing some 4,000 professionals, the group serves both the public and private sector at the highest level and is widely recognised as the partner of choice.-TradeArabia News Service 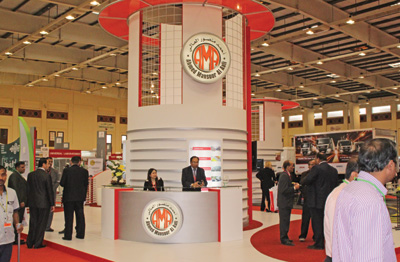